ThanksgivingWe asked you what the craziest thing that had happened to you on Thanksgiving was. You answered. These are a few that really take the cake (or the....pie?).

One year, my grandma realized at like 4pm that she forgot to turn the oven on for the turkey. We decided that we needed to have turkey, so my mom went out to the store (in practically a blizzard) to find some cooked turkey. Unfortunately, the only place that was open was a gas station, so she just picked up sliced turkey from there! It was so gross and we still joke about it!

When I was abroad, I wanted to make pumpkin cheesecake for our Friendsgiving, however, in Ireland where I was studying, they don't sell canned pumpkin. I was able to find baby food that was blueberry-pumpkin flavored, so I just used that instead! A whole room full of people ate baby food cheesecake without knowing, and they even liked it!

It hasn’t actually happened yet... but my parents have been secretly divorced for a few years now, and my dad is planning to tell the entire family at Thanksgiving this year. That should be quite a story!

I used to work in a grocery stores. Because I'm a born and bred work horse, I'd work every single holiday to get the overtime. Generally, grocery stores aren't open on Thanksgiving, so the day before is a nightmare. One year I was closing the store. After the closing announcements, we combed the aisles for strays who were crunching in their last minute shopping. I had the honor of guarding the door to make sure nobody snuck in, because we couldn't lock the door until everyone out. After we got everyone out and were about to go home, I see this lady trudging up to the door. I tell her that we're closed and can't let anyone else in, and she gets in my fave and goes, "but I need my herbs!!!! We need to get fresh herbs right now!!!!!" When I tell her again that ew can't let her in, her partner comes up, drive-by style, and she jumps in the car. As they're driving away, she yells "ME AND MY HERBS WILL BE AVENGED!!!" and speeds out of the parking lot. To this day I think about that woman.

I was 13 and I went with my mom to Walmart on Black Friday to get the newest video game. While I was standing there waiting, an old woman came, opened the plastic wrap around the case, and took games out. Then, everyone was taking games out and looking at them, so I did the same. Then a cop came over and told me that I was breaking the rules by touching the game before it was time to, and that if I didn't leave I would be arrested. So I was escorted out of Walmart by a cop on Black Friday in front of the whole town, and I cried in front of everyone 😂

When I was a kid, each year one of the grandkids had to take a turn wearing a pilgrim costume to Thanksgiving. I always refused 🤪It is strange, I agree.

My mom elbowed me in the face one Thanksgiving while we were playing flag football so she could score a touchdown. I had a huge bruise on my face for like a week 😭

I tripped up the stairs and shattered like 6 of the fine china plates that my parents got for their wedding 😬 It was not the happiest of Thanksgiving... 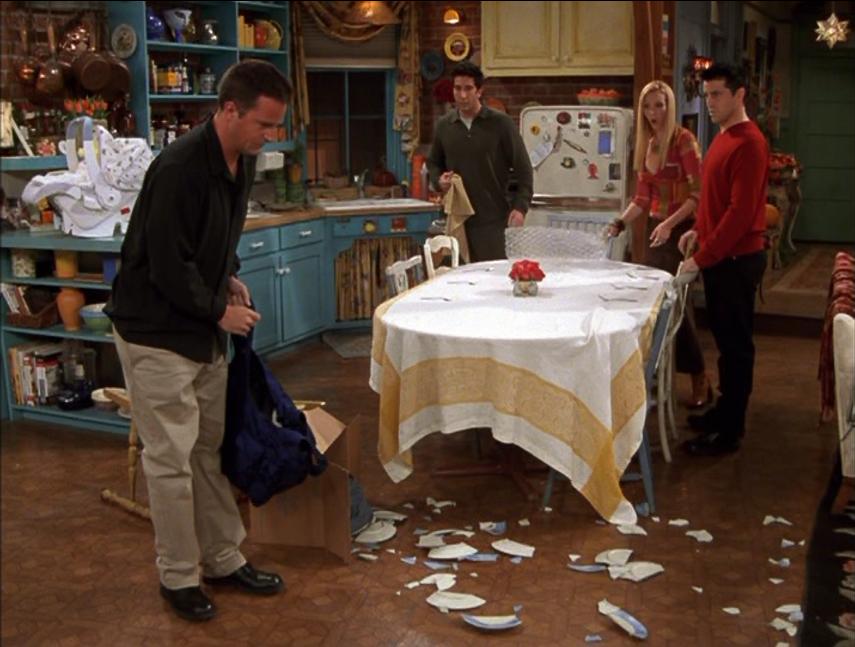 I drove home with my friend and her parents (who were going through a divorce), and 30 minutes away from my house the car broke down. They then took a tow truck, and left me on the side of the road to wait for my brother to pick me up.

One time my cousin and her family were hosting Thanksgiving and the menu was literally just cold ham, mashed potatoes, and Brussels sprouts. I guess it's not crazy but it's just f*ckin rude!! It's Thanksgiving, where's the turkey, stuffing, and gravy!

I wasn't there for it, but my grandpa said that when he and my grandma had first gotten married, my grandpa cooked the turkey for the first time ever. When he took it out of the oven, it fell on the floor, and he just said "5 second rule" and put it back in the pan and served it to everyone 😂he didn't tell them it had been on the floor until a few years later!

One year my aunt baked all the desserts on Wednesday and left them all on the counter (like different desserts). Thursday morning her 13-year old dog was laying at the bottom of the stairs and didn't look good, and my aunt was honestly worried he was dead! Turns out, the dog had jumped up on the counter and ate EVERY SINGLE DESSERT, so he was super super full. He couldn't walk for like 4 days after, they even had to carry him outside to go to the bathroom 😭 he was fine, he just got reeeeeally fat! They didn't even know he could jump up on counters because he was so old. Guess the heart wants what it wants 😂

It was freshman year of college thanksgiving and I hadn’t gained the freshman 15 yet, so I still fit into my roommate's clothes (I wore her dress for thanksgiving dinner) 26 family members / family friends had just finished eating. My chatty uncle was telling a story about how he was trying to keep deer from his suburban home garden and he said the only deer spray that worked smelled 'as bad as the devil's rectum.' I happened to be the only one at the table still eating and he said it just as I took a bite of mashed potatoes. I then quickly tried to flush it down with some prosecco, but instead ending up choking. Pretty bad. I ran and got up from the dining room table. At the time I hadn’t thrown up from drinking more than 2 or 3 times ever, so I didn’t like throwing up in toilets, so I ran from my seat to the kitchen sink and didn’t quite make it as I threw up all over the kitchen floor on the way to the sink. Then while running, I slipped and fell onto my back laying on the ground in my roommate's dress. My loud New York family finally realized I was gone when they heard the thump of me landing on the floor. My aunts, being most concerned, ran into the kitchen with my mom not so far behind. My aunts helped me up asked what happened and said everything was going to be fine. Then my mom came in and yelled at the top of her lungs that I "ruined thanksgiving dinner" by doing that and that I must have been so hungover from the night before (who are we kidding I was a freshman, hangovers don’t really exist until you've graduated) and that’s why I did that. But I REALLY was choking. And my roommate never got her dress back. The end. Ruined thanksgiving.

My grandma told my uncle to not bring his flying squirrel to thanksgiving. He didn’t bring it, but he found one of my dog's toys that looked like a squirrel and he put it in his shirt pocket. We all sit down at the table and my uncle takes the tail out and starts wiggling it. My grandma jumps up and goes “I told you not to bring the damn flying squirrel!!!!”

6 Thanksgiving episodes to get you in the mood

How much do you really know about Thanksgiving?

What to wear down to the kitchen for Thanksgiving dinner