I love Chipotle, Chipotle is my life

If you find yourself reenacting that Vine (RIP) on the daily, then this is the blog for you. Some of the greatest pop culture moments revolve around food (and our love of it). Doesn't matter if it's a television show, movie, or something a celebrity did... burritos are EVERYWHERE. Don't believe me? Just take a look at 7 burrito pop culture moments to wrap your head around. And yes, I SUPPOSE there are spoilers below.

Celebrities, they're just like us. You'd think a celeb would only take to Twitter to promote their upcoming project (or even rant about politics) but not Adele. Much like the rest of us, she uses her Twitter to show just who she is and who she is... well just loves burritos and in 2016 took to Twitter to talk about a particularly amazing one.

Okay so chimichangas aren't burritos in the traditional sense... they're fried, therefore they are better. Anyways, it turns out that Deadpool and his obsession with chimichangas isn't due to his love of the food (he doesn't even like them). His obsession is due to the fact he just likes saying the word. Can you blame him? Go on, repeat the word a few hundred times. I know I did.

3. Ansel Elgort gets interrupted at Chipotle

Being interrupted while eating is THE WORST. Don't @ me. This is a fact. I can't imagine what life as a celebrity is like if I continuously got interrupted while trying to eat my meal. Let alone one of my favorite things and the so called fans interrupting are then rude. I don't fault Ansel for this at all. I'd have done the same thing. 😡

4. Rebel Wilson takes one for the team

Rebel Wilson as Fat Amy is one of the best things to happen to pop culture in a long time. Almost every single one of her lines from Pitch Perfect is something I try to work into every day conversation. Her interactions with Bumper are part of the reason the movie turned out so well and the I C O N I C burrito scene is one I still remember to this day.

5. When a burrito pitted Jack Black against Will Ferrell

Burritos are filling, that is a fact but you should never throw them out the window. That being said, when the person throwing the burrito out the window is Will Ferrell and the person getting hit is Jack Black... you know you're in for either a really good time or DRAMA. In Anchorman, you certainly got drama. Poor Baxter.

The Good Place is a forking great show. The twist at the end of the first season allowed the second season to start fresh and keep things interesting. When our favorite foursome allow themselves to be thrown at the mercy of the universe's ultimate decider... things get weird. The "all knowing" burrito turns out to just be a burrito, although my guess is that it was a delicious burrito.

If you say you've NEVER said "I'd give anything to have a burrito right now", you're lying and I don't deal with liars. JK! Well, only partly JK as I will deal with liars but come on... burritos are amazing. Even box-office flops have their "iconic" pop culture moments. Just look at Taylor Kitsch risking everything to get the girl he's been hitting on a burrito so she will give him the time of day. While I love burritos, I don't love anything enough to get tasered.

And hey, if you're a student in the Florida area check out your local Chipotle on April 26th to participate in a BOGO you will never forget. Food induced naps are the BEST kind of naps. 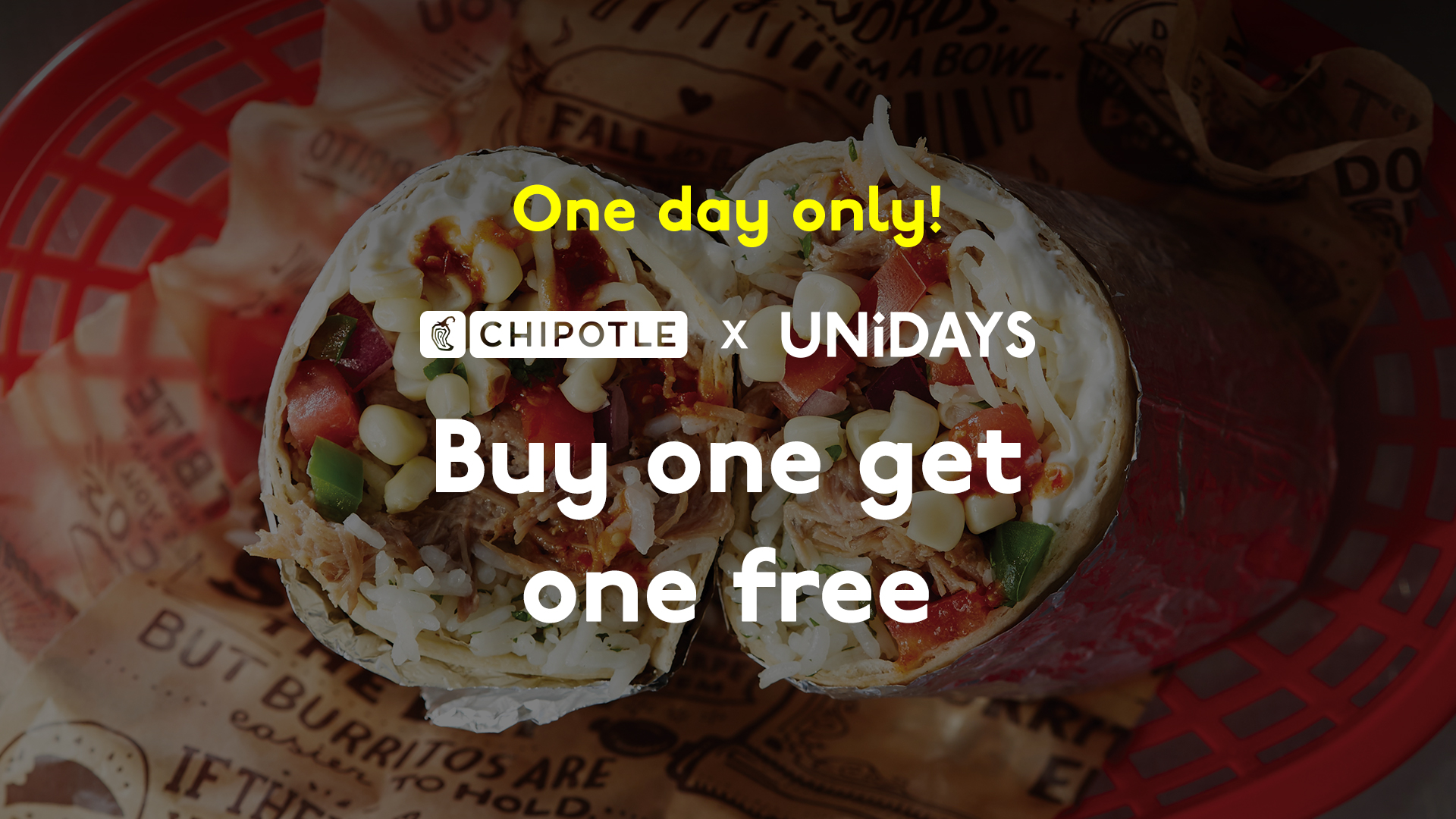 How to redeem your BOGO offer with Chipotle x UNiDAYS