Back on the guest blogger train and today we've got a super interesting and tasty looking post from Emily of Emily Cooks Vegan! Now don't worry, we're not asking you meat-lovers to permanently put down the bacon, egg & cheese, however Emily has got some amazing recipes to share that are really yummy, nutritious and make cheap eats at college. Perfect for student pockets! [blockquote quote="Hi, I’m Emily! I’m a recent graduate of Lancaster University and and have an extraordinary sweet tooth!" name=""] When you’re vegan or vegetarian, or even just trying to get a little healthier, making food can seem like a bit of a drag. Especially at school, when spending money on “free from” food over alcohol is the last thing on your mind! I also find that whenever you’re in a restaurant often the only vegan options will be salad, which is a shame because I still adore junk food and desserts… So I invented my own ways of getting a sweet fix. So get into your kitchen and without further ado here are my favourite vegan desserts. 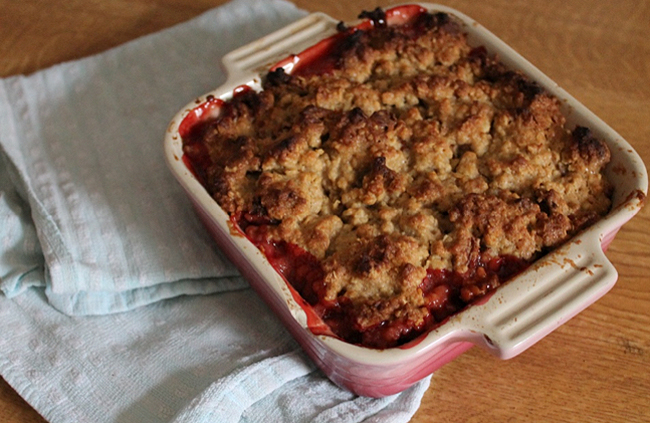 First up, strawberry and nectarine crisp, perfect for lazy afternoons to get you through dull essays (this one’s a one-person portion as well, so be selfish with this dessert!); just preheat the oven to 390 degrees Fahrenheit, then throw two chopped nectarines and two handfuls of strawberries into a greased dish. Mix one cup of oats, half a cup each of plain flour, chopped pecans, light brown sugar, and four tablespoons of dairy-free butter into a crumble mixture. Add this on top of the fruit and bake for 45 minutes or until golden.

Secondly, honeycomb! I’m always craving Crunchie bars, so I thought I’d try to make the real thing, and it’s surprisingly easy once you try it a few times. It took me two goes to get it right, so please don’t be disheartened if yours goes wrong the first time! Simply put 100g of caster sugar and 4 tablespoons of golden syrup into a stainless steel pan, stir once, and then heat (do not stir at all whilst it’s on the heat!) 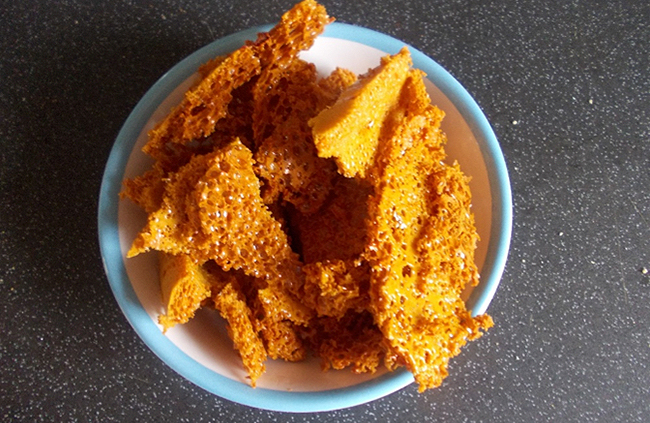 Leave the sugar to bubble away for a few minutes until it’s turned a deep golden color, like maple syrup, then quickly whisk in one and a half teaspoons of bicarbonate of soda, and when it whooshes up, pour it into a small tin lined with grease-proof paper (it will spread out by itself). Leave for a few minutes to set, then bash into little pieces. Try it topping a chocolate mug cake, dipped in dark chocolate, smashed into brownies or just on its own.

Lastly, my no-bake chocolate macaroons. Perfect for a chocolate fix without much work, as there’s no baking or cooking required, just leave it in the freezer and enjoy the chocolatey goodness! Mash one banana, then stir in 30ml of  vegetable oil, 50ml of agave syrup (vegan liquid sugar), and half a teaspoon of vanilla extract. Sift in 6 tablespoons of cocoa powder and stir until combined. Now stir in 120g of dessicated coconut and a pinch of salt. Scoop mounds of the mixture into a greaseproof tray and pop it in the freezer for around 20 minutes, or until the macaroons are firm. Store in the freezer until ready to enjoy (they will go soft at room temperature). 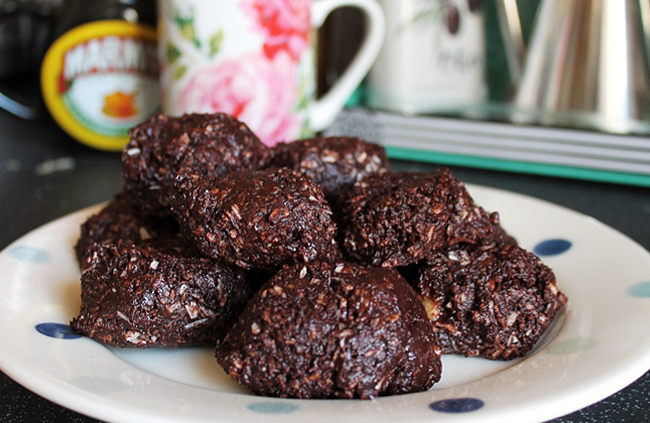 So there we go, there’s how to still have lovely, tasty desserts while still maintaining a vegan diet… Who said that vegan food was boring?! More tasty recipes can be found at EmilyCooksVegan, if you liked any of these be sure to tweet me @EmilyChudy with which recipe you tried! A massive thank you to Emily, we've loved this guest post. It's really opened our eyes to other desserts and we're especially excited to try the no-bake macaroons! Loads of celebs such as Jennifer Lopez, Beyonce & Jay Z have been following the vegan diet, some permanently and some as just a quick fix. Being vegan is essentially being a strict vegetarian and not eating or wearing any animal products including milk, honey, leather and wool. If you're thinking about a detox, maybe this diet is for you and this guest post will have shown you some amazing desserts which will mean you can still eat healthy while having your cake AND eating it too.