According to Wikipedia – who keep asking me for $3 and, look, it’s a decent deal tbh – there is a proverb that states: “A wise person will climb Mt. Fuji once in their lifetime, but only a fool would climb it twice.”

My reason? I was about to turn 30 and had never climbed a mountain. The hill near my apartment gives me trouble, so taking on 3,776m of steep, stubborn rock would be quite a feat (in the overall scheme of things, it’s not that tall for a mountain, but if you don’t ever climb mountains, it’s daunting).

Like a sucker, I spent about $700 at Kathmandu back in Sydney to ensure I had all the right gear… only to arrive, after a couple lengthy bus rides out of Tokyo, at Fuji Subaru Line 5th Station (2,300m elevation) and see people moseying on up in Vans and shorts. That’s right: I didn’t even properly climb Mt. Fuji – I only did the 1,500m chunk near the peak – but I’m gonna keep complaining all the same, if you don’t mind. 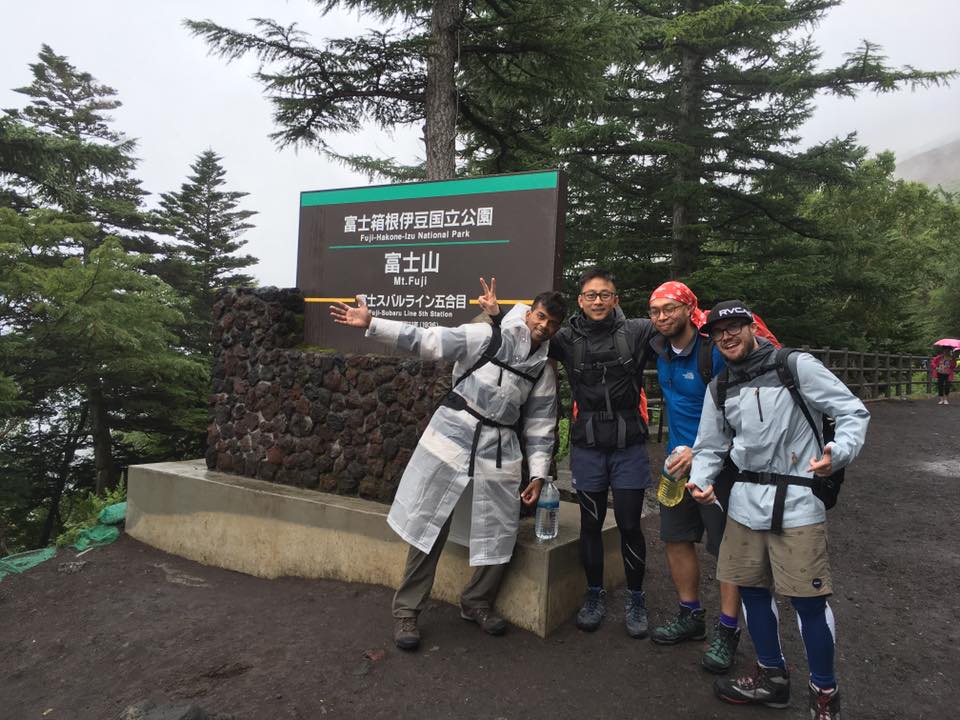 Here’s another thing: in the days leading up to the climb, people had died in this nationwide heatwave. One news bulletin was focused on how the heatwave was affecting the local squirrels. I couldn’t understand what was being said in the broadcast, but there appeared to be a fair bit of concern regarding the squirrels’ ability to withstand the high temps. My point is: I had enough on my mind without having to deal with the fate of the squirrels. I needed to focus.

We begin the ascent, and it’s easy enough. It’s beautiful, too: the wildflowers are colourful specks against a bumpy backdrop of black and grey rock; if you look up, the clouds are hooking-up with the fog.

Is that rain I feel? At first it's spitting. Then it's flicking. Then it gets real cold. Then I was grateful for the downpour because you couldn’t tell I was crying. 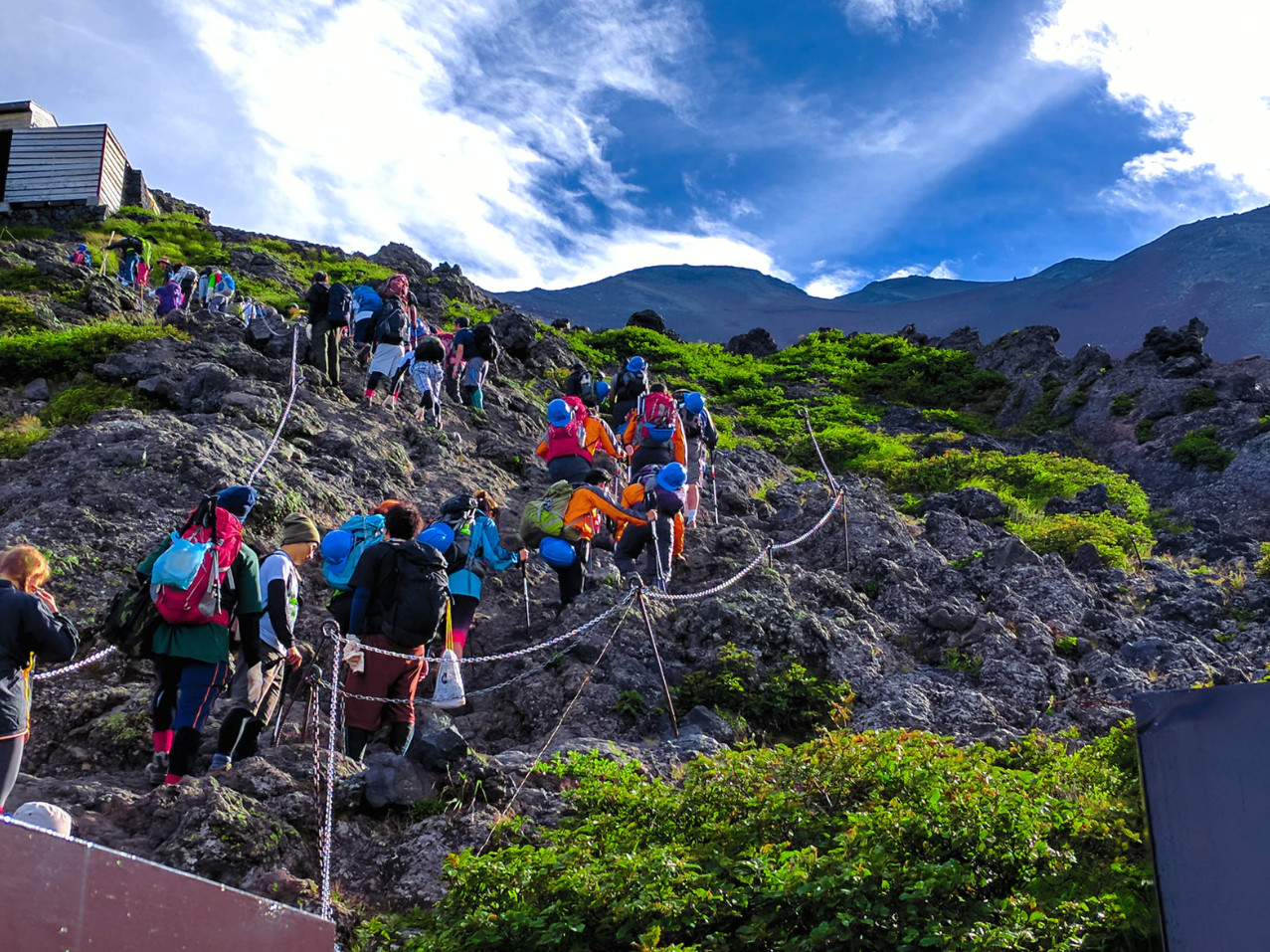 Six Snickers (haven’t had one since) and a pack of Haribo later, we rock up at the ‘lodge’, where it’s time for some R&R i.e. a three-hour snooze and food that isn’t Snickers.

It’s 11:30PM, which means it’s time to make the push to the summit for sunrise. Climbing in the dark when you’re drowsy and sore is kinda like getting up to pee in the middle of the night after you’ve been out drinking – plus you’re on a mountain and it’s raining.

There’s also the altitude to contend with. Everyone handles altitude differently, but the general vibe is your nose being pinched shut while your head’s in a vise. It makes a tough slog up a mountainside that much harder, so prepare for a mental battle (they sell cans of oxygen on the way up, if you’re into that sort of thing). What kicked my arse into gear was seeing the kids in slides and overweight smokers – yes, people were puffing away during the climb – breezing past me. 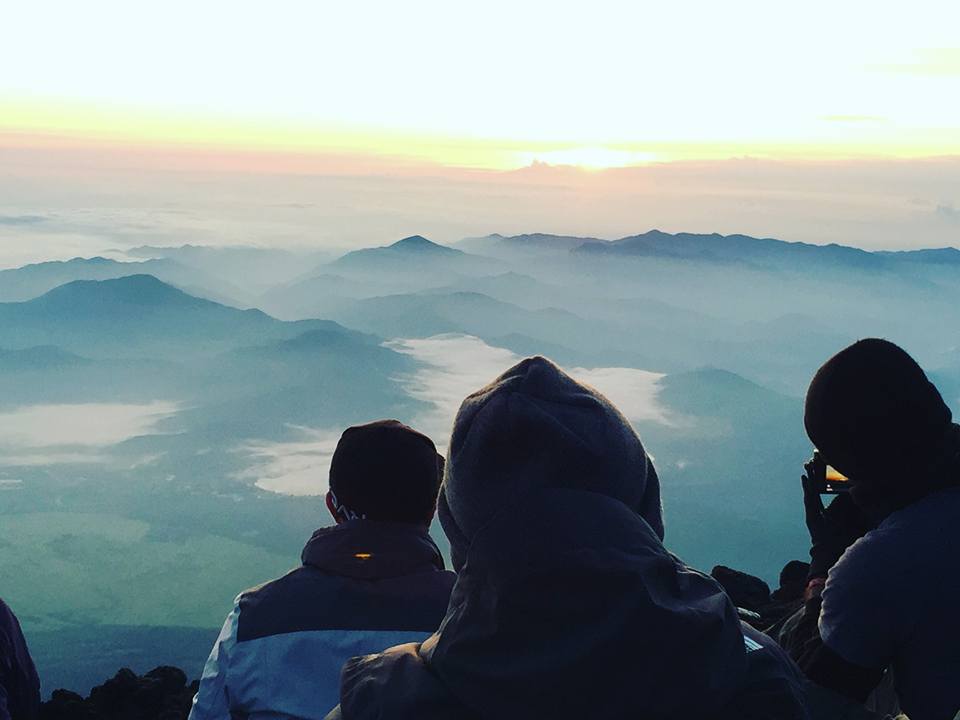 Sunrise atop Mt Fuji is a pretty spesh feat of nature. It’s like that talking Husky on YouTube or vids of otters playing with pebbles, except arguably more captivating and majestic.

What goes up must come down. The return journey involves a ramp of loose shale and volcanic rock… in 35C heat… when I couldn’t even be fkd standing up. I eventually muster up some motivation, buy four bottles of Fanta, then slip and swear my way down. Happy birthday to me! 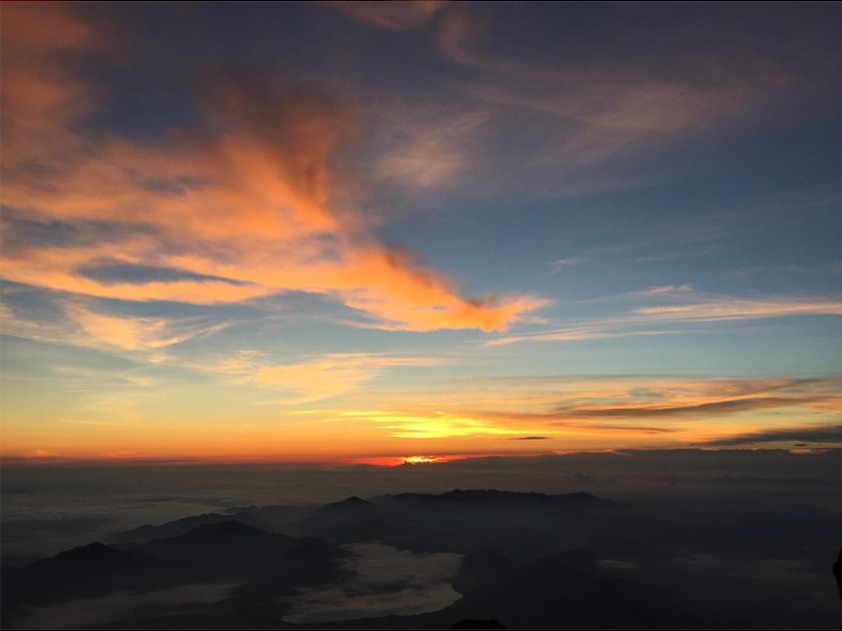 Mt Fuji climbing season is from July – September (it’s usually snow-capped the rest of the year).