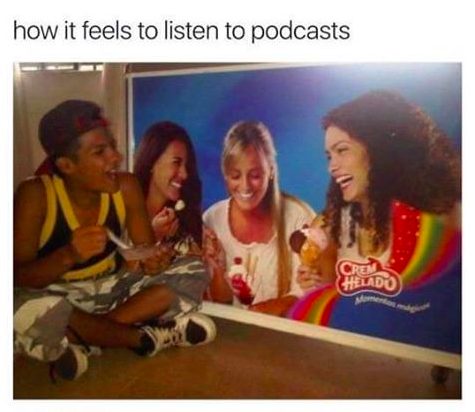 "Just the other day I was smiling very incredibly hard while I was on the subway without realizing it. That is, until someone stopped me to ask what could possibly bring me that kind of joy on my morning commute. It was THIS podcast, of course. Does your boyfriend have commitment issues? Are you in love with the wrong person? Worry not: Anna Faris is here to save the day. Yes, Chris Pratt's wife and the star of cult comedy favorites The Hot Chick, Scary Movie and House Bunny is dishing out advice in the most sincere and unqualified way possible. She is utterly delightful; Pratt and their adorable baby (he wears GLASSES you guys) occasionally stumble into the dining room where Anna hosts with a slew of celebrity guests who chime in with their best attempts at advice. Not gonna lie, the theme song is really, really catchy and sometimes I listen to it on its own. Oh, I love Sim, the producer, too." - Sarah

"A must-listen for the dedicated runner/triathlete." - Anthony