Let’s face it, we’d be fibbing if we said we didn’t associate Christmas with food; and if there was ever a festive ritual to get behind, it’s celebrating the end of the first term with a Christmas-themed burger. Restaurants across the UK are celebrating Christmas-centric foods the only way they know how, so to treat you hardworking lot we’ve called on our friends at DesignMyNight to give us the low-down on where to find these sliders. From London to Leeds, here’s where to feast on the most indulgent burgers ever.

MEATLiquor have taken the festive burger game to a new level this year with a food coma-inducing and gluttonous but ultimately very Christmassy, Burgducken burger. Vegetarians avert your eyes, as it features not one, not two, but five different meats in its towering glory. Your mouth’s in for a workout as you chow down on an assemblage of turkey, duck, chicken, pigeon and pheasant, that’s then lathered in brandy and cranberry mayonnaise, brussel sprout coleslaw, a generous helping of XXXmas pudding ketchup and topped with a pig in a blanket. Elasticated trousers may be mandatory. 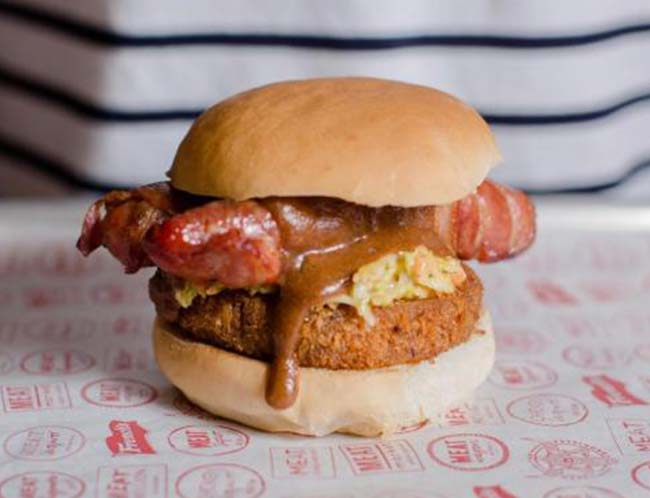 The clue’s in the name with these guys, but Honest Burgers know a thing (or ten) about knocking-up some seriously dribble-worthy sliders, and happily, they take Christmas time as an excuse to experiment in the kitchen. Catering to meat and cheese lovers throughout December, their Christmas Special consists of a beef patty, which is then topped with smoked bacon, deep-fried camembert, rocket and lashings of cranberry sauce, served alongside their ridiculously moorish homemade rosemary chips. They have over 20 venues in London and across the UK too, so you have no excuse to miss out on these buns. 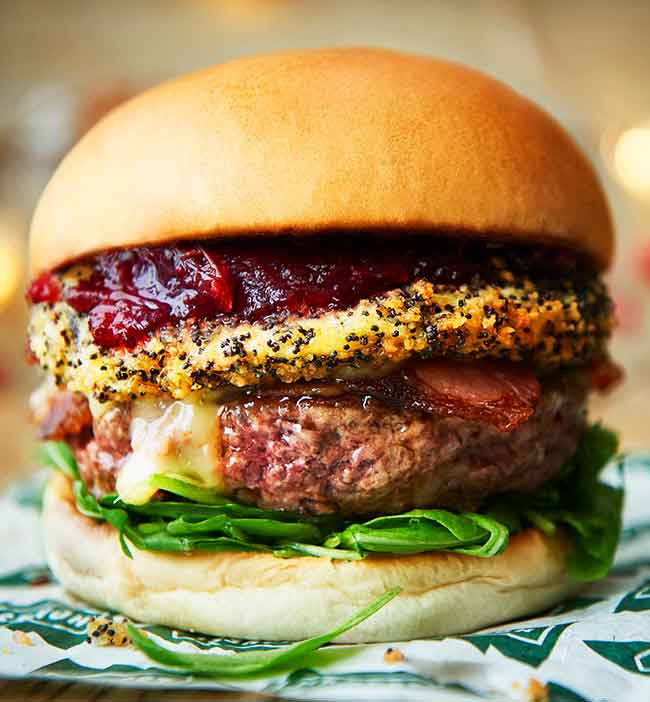 Forget what Buddy the Elf said; the best way to spread Christmas cheer is not by singing, it’s by stuffing your face with a festive burger. Ben’s Canteen have released their limited edition line-up for December and it looks insane. Their Xmas Turkey Burger combines all of the much-loved Christmas dinner essentials, and it’s put together with a sage brined and buttermilked turkey breast, a slice of Karma Cola braised ham, a squashed stuffing ball, and then comes lathered in creamy brie, bacon and chestnut mayo, mulled wine and cranberry sauce - all topped off with a sprinkling of buttered brussel tops. 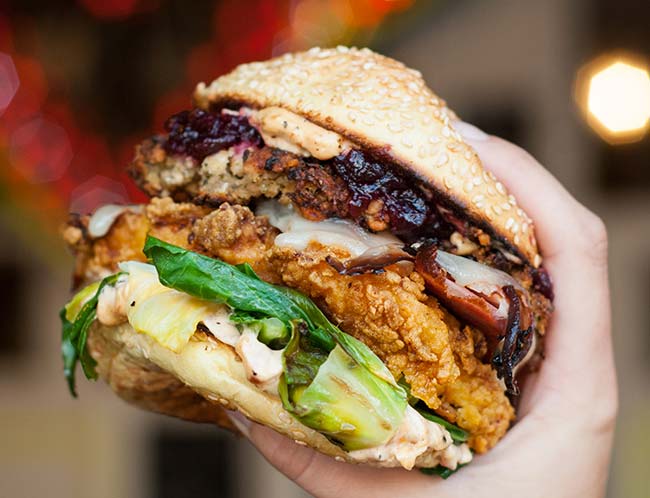 Mac & Wild is a Scottish restaurant dedicated to serving the finest Highland meats around, so it’s no surprise that they’re going all out with their Christmas Burger. This meat-alicious number is made with a venison patty, which is then topped with pork stuffing and smothered in melted Morangie brie, red cabbage and shredded sprout tops. Indulgent as they come, it’s served with a portion of festive fries. 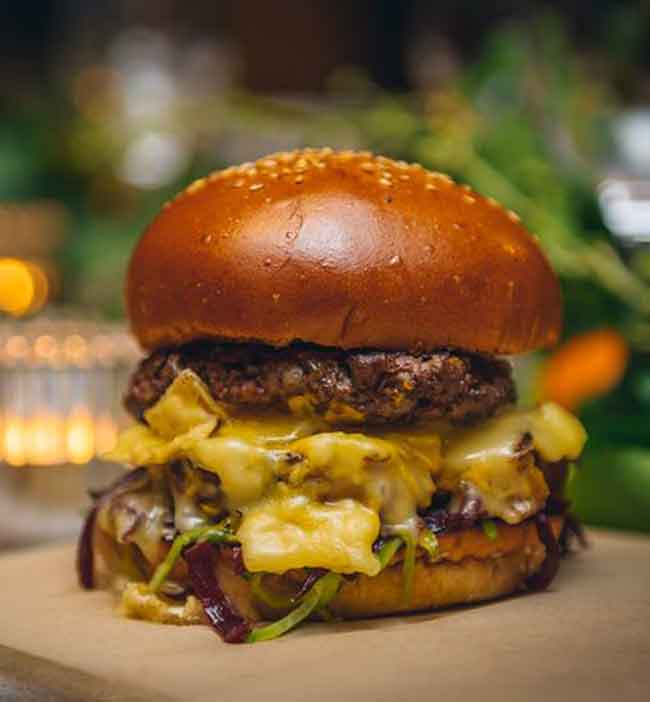 Beef and turkey are great and everything, but if you need a mini-break from the above over the Christmas period, head to American-style chicken joint, Absurd Bird. Their Festive Tower Burger is as festive as Santa himself. Encased in a ruby red bun, it’s built with a dribble-worthy buttermilk fried chicken fillet that’s topped with cornbread pudding stuffing and it comes lathered in sweet gravy and cranberry remoulade. If you’re feeling extra peckish, you can add an extra fillet to your stack. 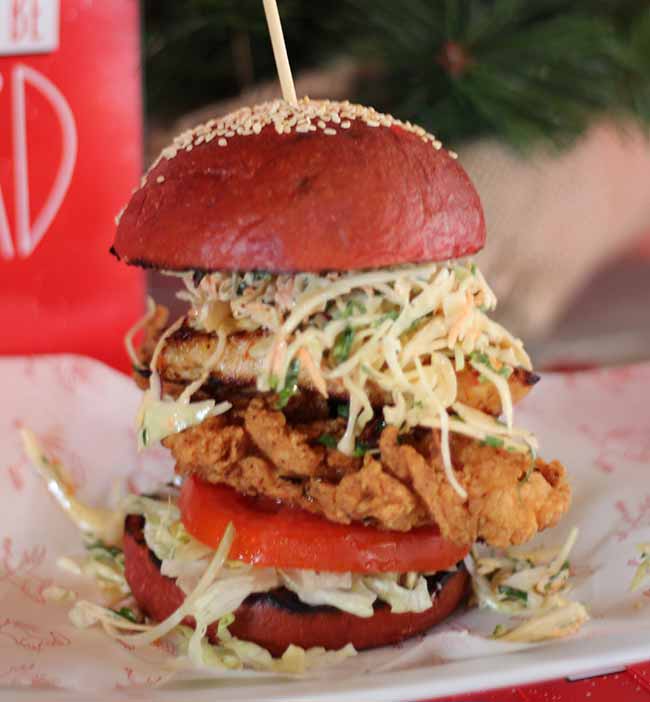 A Christmas burger list wouldn’t be complete without a vegetarian option, and although we don’t say this very often - Dirty Bones’ festive meat-free offering is almost too good to eat. The Veggie Holiday Burger is what meat-free dreams are made of with a quinoa, pecan and black bean patty spiced with cumin and Dirty Bones signature BBQ sauce, an avocado and sprout vinaigrette, topped with red beetroot and carrot coleslaw inside a wheat ciabatta bun. 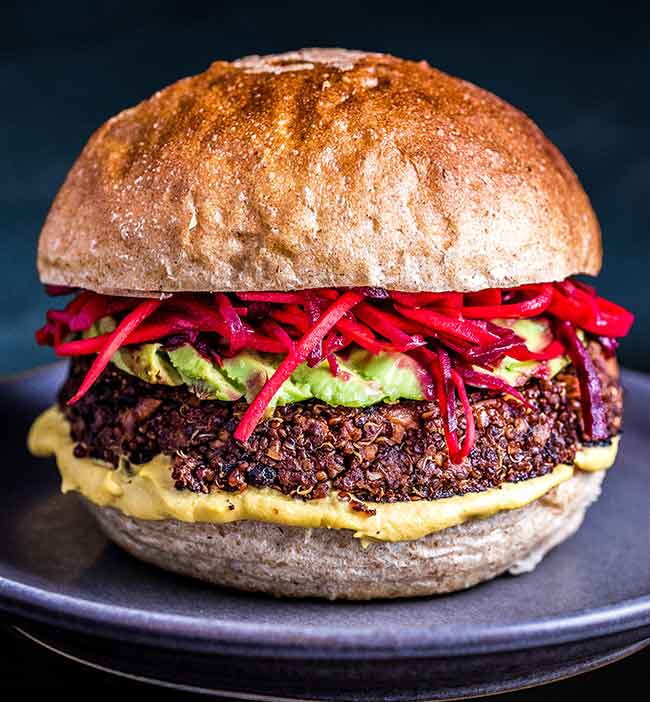 The Rudolph Burger at The Old Queen’s Head - London

Lucky Chip burgers are the type to write home about, and luckily for you hungry lot, you can get them in abundance at quirky Islington boozer, The Old Queen’s Head. You’ll find a whole menu packed with festive sliders when you visit; but we’d recommend going for the burger of the month, The Rudolph. This taste sensation is assembled with a venison patty, smothered in stilton, topped with Applewood smoked bacon, blueberry and blackberry gin jam, rocket and aioli. 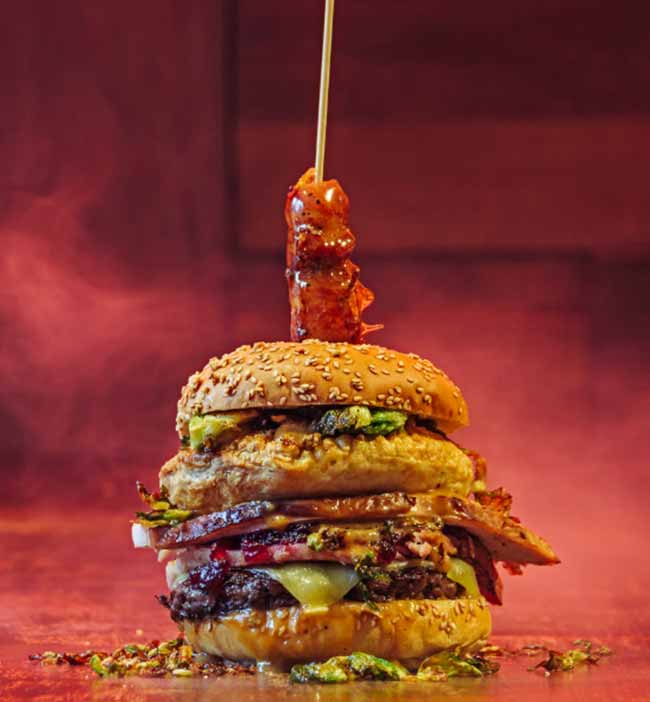 Red’s True BBQ in Leeds aren't ones to shy away from unabashedly gluttonous burgers and nor should you. Celebrate reaching the end of term by ditching calorie counting for a day and lock lips with their Monte Christmas Burger. This monster starts with a turkey patty, which is then piled with ham, sliced turkey breast, peppered bacon, smothered in mountains of Monterey Jack cheese and drizzled in cranberry and dirty sauce, all squeezed between - wait for it - a vanilla custard-soaked and fried brioche bun. 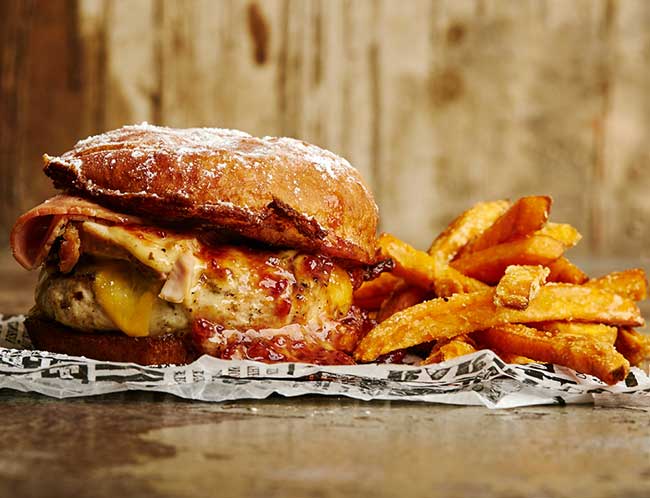 Sun of A Nutcracker at Almost Famous - Liverpool

Almost Famous’ Christmas burgers are always a sight to behold but this year’s offering will blow your mind. For the love of Santa, visit here with an empty stomach and order the Sun Of A Nutcracker. This beast-like burger contains a juicy famous cheeseburger, a BBQ-spiced sausage stuffing patty, buttermilk fried turkey, a mound of festive cream slaw and a sauce trio of bacon and cranberry jam, JD cola BBQ and brandy buttered peppercorn mayo. It doesn’t even stop there - the feast continues with an ‘ultimate’ sausage roll (containing stuffing, bacon cranberry jam, chorizo - the list goes on) a pig in a blanket, and a pot of AFC gravy on the side. 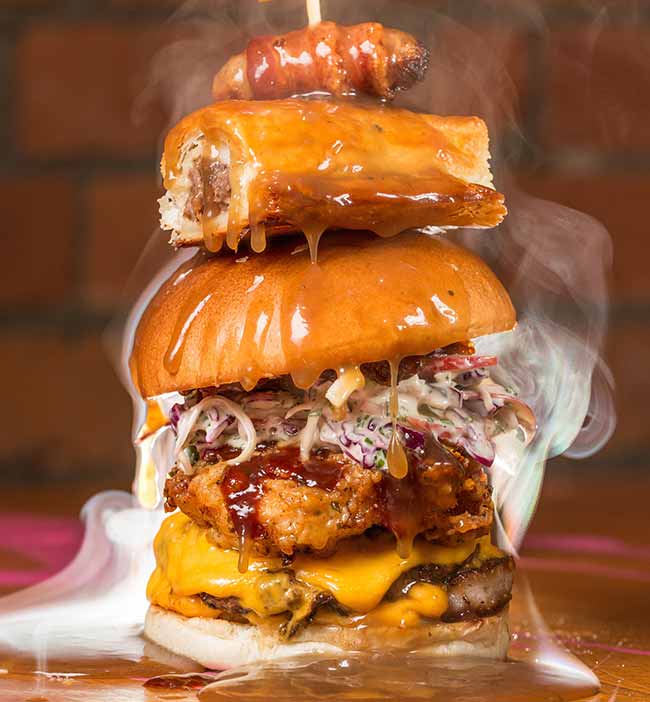 There’s a place in Manchester called Solita and they have created a Christmas Burger that weighs a whopping 1kg. Prepare to be full for a week as you get your chops around a chuck steak patty topped with aged cheddar cheese, roast gammon, house smoked turkey breast, with lashings of port and cranberry sauce and turkey gravy. It also features a festive bake pastry, deep-fried sprouts and a candied pig in a blanket, all inside a golden brioche bun.