WE WILL NOT CALM DOWN

In case you've been living under a rock, you should probably know that T-Swizzle is back with yet another banger.

If you haven't watched the lyric video yet, STOP AND DO THAT NOW.

Ready? Good. Now that you've done your homework, time to speculate wildly about the meaning behind these Easter eggs!

We KNEW there would be a snake reference in there. No matter how many times she was called a snake, IT DIDN'T TEAR HER DOWN!

2. The song cover showing a snake turning into butterflies 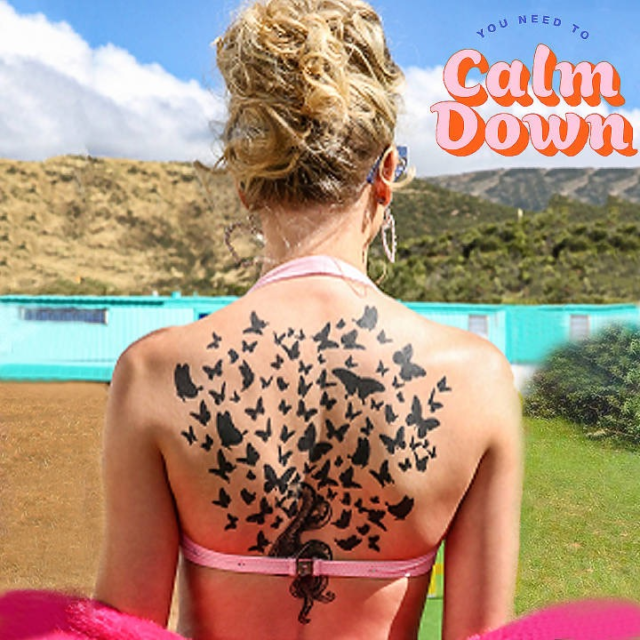 TBT to the ME! music video!!! This is def gonna be the era of butterflies, and we're here for it.

There's a LOT of speculation on the internet right now that Taylor is gearing up to come out. Regardless of whether or not that's true, she's been a KILLER advocate for LGBTQ+ rights lately, and spelling "glad" with two As seems to be referencing GLAAD, the LGBTQ+ advocacy group! This def wasn't an accident!

Around 1:37, she starts to use words with an "EA" in them like seats, scream, and peace, which we noticed because she actually highlighted the "EA" in those words! WHAT DOES IT MEEEEEAN???

5. "Shade never made anybody less gay"

An iconic line. Taylor is a champion for LGBTQ+ advocacy, and it seems like she is trying to say "just because you refuse to accept someone's sexuality, doesn't mean they're going to change." TRUUUUE. Plus, the word gay is written in beautiful rainbow letters!

What other Easter eggs did you catch???