Strawberries & Creem takes place on Saturday 16th June at Haggis Farm, Cambridge. Headliners this year include T-Pain, Not3s and Kojo Funds. We caught up with Preye Crooks (below, far right) Strawberries & Creem Festival Co-Founder to get the low down on what it takes to create your own music festival! For more information and tickets please visit the website. 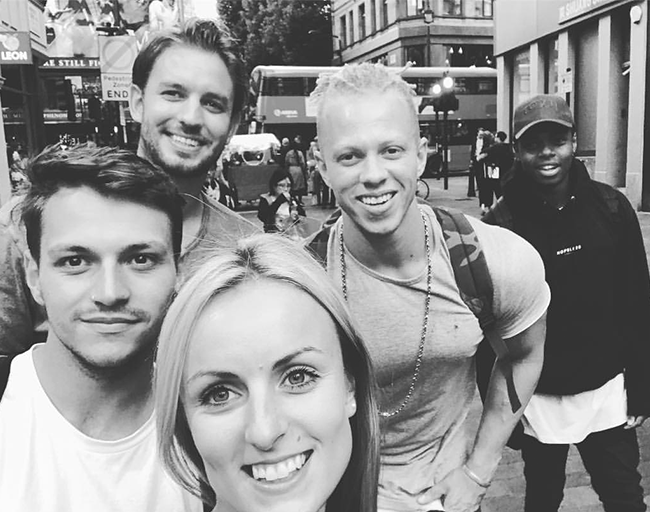 You started Strawberries & Creem whilst you were at uni, where did the idea come from?

It was all very organic! The team all felt that although we loved Cambridge club nights (no disrespect to them), there was an opportunity to create club nights with the more modern music that we were listening to at the time (Skepta, Shy FX etc.) Our club night Creem was born out of this, and we would run weekly nights for 200-300 with this music policy. At the end of the year we decided to put on a small garden party for 800 people, and booked Shy FX, David Rodigan and Jus Now to headline. As it was an offshoot from our club night we called it Strawberries & Creem.

And how did the team come together?

The founding father Will had just graduated from Manchester University where he had been running Uni club nights in his spare time. When he came back to his hometown Cambridge, he realised there was an opportunity to start club nights and took to the University Fresher’s Fair to try and recruit some promoters. We then found a brilliant DJ from Anglia Ruskin University (Cardinal Sound) and the original team was created.

You've really helped put Cambridge on the map to rival London festivals and surrounding areas. What makes it stand out to you?

I think we stand out for two reasons. Firstly the makeup of our team is pretty different to almost all other Festivals. The founders are made up of a DJ, a Sony A&R, a model, a tech company founder and an events manager – all of whom are best mates, under the age of 24, and all bring very different qualities to the table. Strawberries & Creem is a Festival for young people made by young people. By being totally independent and autonomous we like to think we can create a Festival that truly represents what people our age want.

Secondly, our music policy has always been based around the policy of ‘Celebrating Heritage & Championing Future’. We wanted our line-ups to represent the music we had grown up with throughout our lives, from Garage in the 90’s (Luck & Neat, Pied Piper etc.), to the legendary ‘Noughties’ era (Nelly, T-Pain, Shaggy), to the music we listen to on our phones today (Not3s, Octavian, J-Hus). By recognizing the music of our past, but also trying to promote the music of tomorrow, we hope we can provide a really eclectic mix of credible music for all.

In the festivals five years, what has been your most proud moment?

It has to be getting through Strawberries & Creem 2017 without any major disasters and with some very positive reviews. We are only a team of 6, so looking after/catering to the needs of 8,500 people in a field in Cambridge was a task more difficult than we had ever imagined. I think each member of the team walk/ran between 35-40KM that day, looking after artists, attending to any issues, and making sure everything ran smoothly. When the Festival ended at 11PM and we finally got a chance to sit down at 11.30pm I remember us all looking at each other and saying ‘wow, we did it’. That was a good feeling.

...and any lows? How did you learn from these?

To be honest, not really! We absolutely love what we do, and even though there are some really heightened periods of pressure, we wouldn’t really say there were any real lows. I know my business partner has had to pick up human faeces from the site three years running – that is probably a low point for him.

For those that are still at uni, what's the best piece of advice you can give for breaking into the events / music industry?

Don’t get involved for the money! We have been at this for four years now, and the margins at least for the beginning are beyond tight, so your passion for music and events has to be pretty strong. It really is a lot of hours work.

I would also say pick your team wisely. Events of this size obviously require a dedicated team, and you are likely to be spending an excruciatingly large amount of time with these people. Make sure they have the same ambitions as you, the same goals as you, the same work ethic as you – as these events most definitely cannot be done on your own. We are really fortunate to all be best mates, and to have very similar ambitions on where we want to take the Festival moving forward. Even then we fall out pretty much every week... so yeahh, pick wisely!

Strawberries and cream is a perfect pairing. What other combos could you not live without?

Looking into the future, who is your dream headliner? Where do you see S&C's future?

50 Cent. Missy Elliot. Will Smith maybe... people like a throwback headliner, so we are going to keep trying to go down this route.

We want S&C to keep growing at the rate it is to be honest. In four years we have grown from 800-13,000. Hopefully we can get this number up to 30,000-40,000 in the coming years. We have also started four other festivals in different markets, so the plan is to turn Strawberries & Creem into a multi faceted events company. If we don’t fall out with each other first...

6 reasons why Cardi B is the idol we all deserve