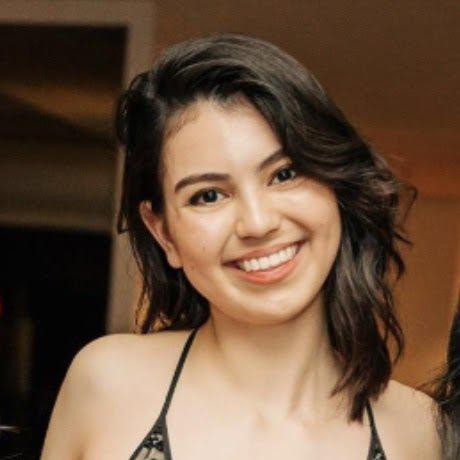 Those were the conditions I faced when I signed up for the 2019 Blackmores Sydney Marathon only 8 weeks out. I don’t know what made me do it. I had always been a runner in school, with a couple of half-marathon distances under my belt and I was used to training for cross country seasons. But nothing beyond that. Nothing to the extent of 42.2kms. That had always been unfathomable.

Unfortunately for my bank account and legs, I enjoy a challenge. It took $140 to fund my participation and change the way I look at both running and my life, forever.

Although I had signed up with two months to go, I had gotten the annual Sydney cold that knocked me out for a week and a half. So technically I had 6.5 weeks. Much less than what any marathon training plan out there recommends. Training for the marathon was stressful, especially when you have to juggle high running mileage, work and studying for finals.

But the runner in me refused to quit. When I start something, I will always complete it. Besides, did I mention I had spent $140 on entry?

Soon, the weeks had flown by and it was the night before race day.

I met up with my running club from uni at 6 am, had a motivating prep talk and before I knew it, I was downing my first gel at the start line in preparation for the several hours of running I had ahead. For the non-runners reading this, a gel comes in little packets and are packed with simple sugars to replenish glycogen levels. This is mainly because most bodies would have burnt through their entire supply of glucose after around 32kms so it’s important to prevent that by fuelling up early on. 10 kilometres

I started off with my two friends, chatting about how exciting this was and how much more relaxing it was than a typical race where you would have to go full out from the very beginning. Once we hit 10 kilometres, the chatting died down as we began to focus on our breathing and pace and before I knew it, I was running alone.

I started to fall into a comfortable pace, and I soon heard the consistent beat from the multiple feet of runners pounding the pavement around me.

At 10 kilometres, a spectator had yelled out “keep going, you’re almost there!” Immediately, a wave of chuckles swept through the runners and I let out a small laugh myself. There was a long way to go and we all knew it. Yet I felt pretty darn amazing at this point. 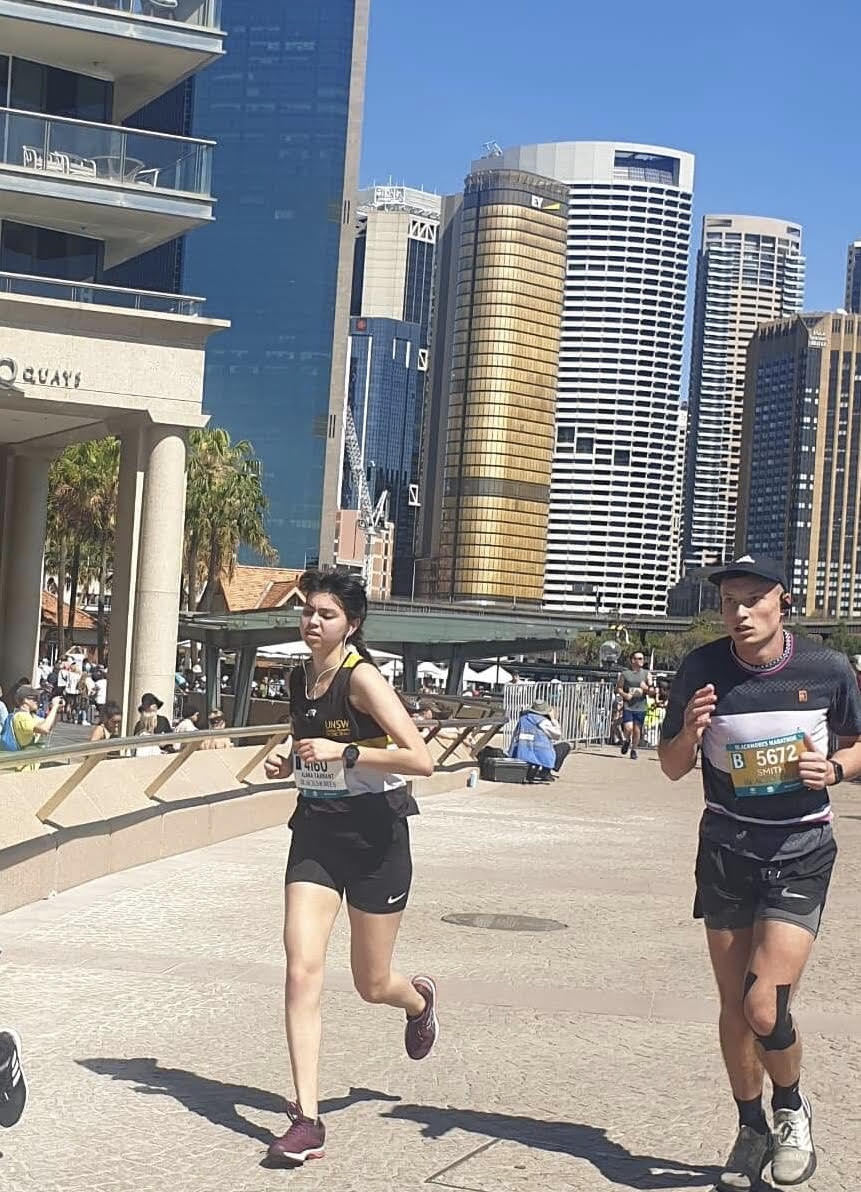 25 kilometres went by faster than I had expected. However, it was at this point that I started to feel queasy. I had taken exactly 4 gels by the 25-kilometre mark. During training, I had practised with GU gels to make sure I didn’t have an adverse reaction to them as other runners have reported, and I was completely fine. On race day, however, it was a different story. It was probably the combination of nerves and excessive stress that made my digestive system freak out, so by this mark, I could feel the sickly sweet gels in my throat. The ‘wanting-to-puke’ level was 5/10.

The nausea continued, but this time the fatigue in the legs was real too. The longest distance I had practised was 32 kilometres. 37 kilometres is a funny point in the race. You know you don’t have much more to go, yet there are still 5 kilometres left and for any ordinary individual, that isn’t a short distance.

I realised, however, that you’re going to hurt anyway so you might as well stop complaining because that won’t make anything easier.

I could hear my friends screaming my name and people clapping and it all felt worth it. I crossed the line, strong and elated (well internally, the finish line photos say otherwise…) 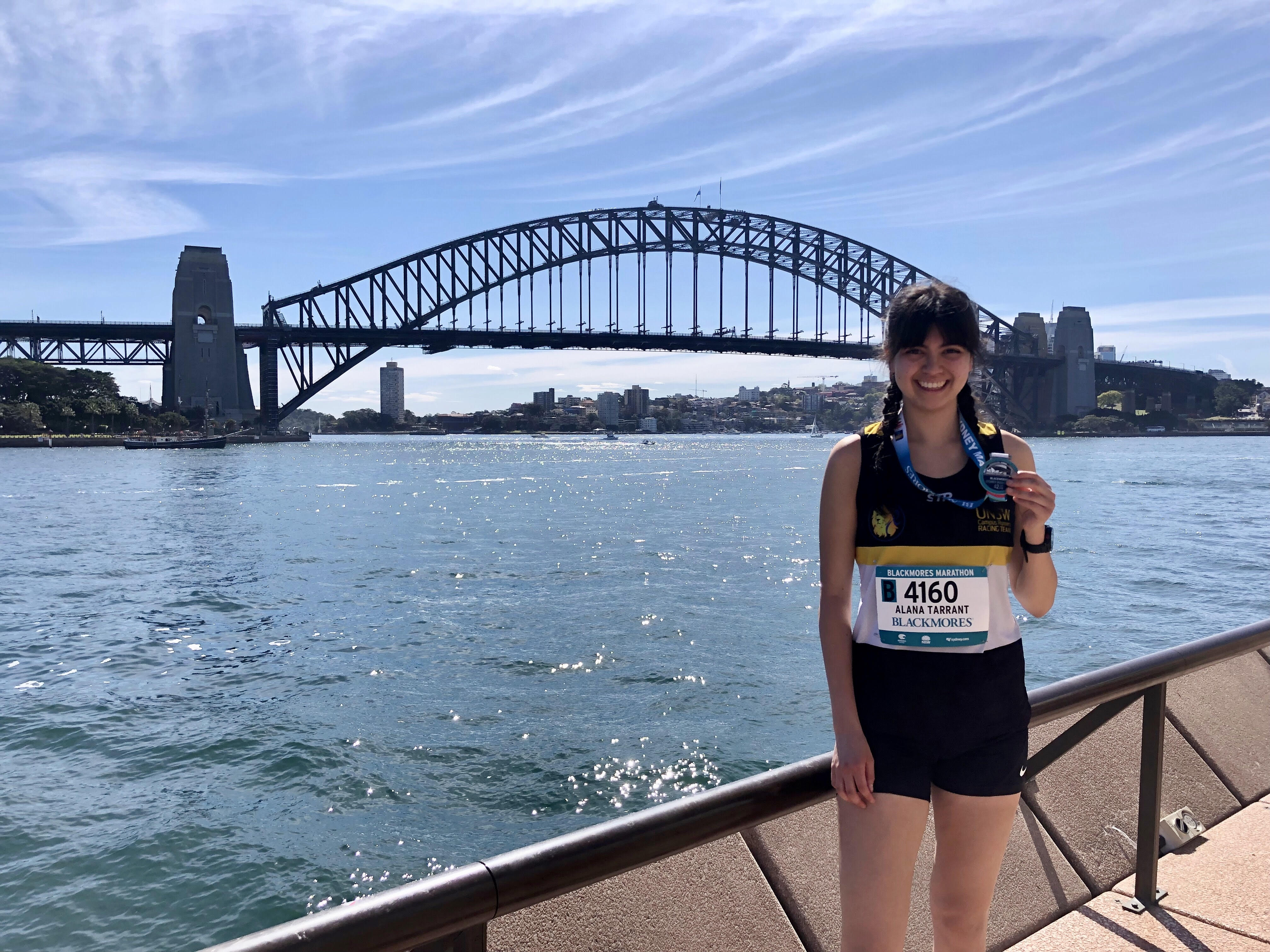 Because of my chronic iron deficiency, excessive fatigue began to set in and the nausea was not going away. Although I was ecstatic to finish the marathon, my body was telling me to get rid of the gels in my stomach and I found it difficult to stand. My ‘wanting-to-puke’ levels reached 9/10 and with my wonderful friend’s support, you can probably guess what happened next.

All in all, it wasn’t really the glamorous day I envisioned it to be, yet I wouldn’t have it any other way. If I hadn’t had trouble on the actual course, I wouldn’t have as much respect for my own capability. My mind had told me that I was hurting, that I was too weak. But I hadn’t given in. I had won. And that thought was what fuelled the smile of satisfaction I gave right in front of the Harbour Bridge on another beautiful Sunday in Sydney.

Thanks for writing for us, Alana!

Alana is an Arts/Law student living in Sydney with a passion for all things health, fashion, culture and food. You can connect with her on LinkedIn!

Fact or Fiction? Can You Bust These Health Myths?

Natural ways to boost your mood